Nepenthes x briggsiana 'Peter D'Amato' is an absolutely gorgeous cultivar. I remember seeing a picture of its blood red pitchers in "The Savage Garden" when I was growing up. I thought it was one of the most grotesquely beautiful plants I had ever seen. I saw that plant again when I visited the California Carnivores nursery as a young adult many years later. Believe me when I say I was stopped dead in my tracks when I saw it for the first time in real life! It is an incredibly striking plant in person!
There is some controversy on the exact source of this particular clone. Although it was named in honor of Peter D'Amato, he was not the original hybridizer. Above is Peter's take on the origin of the clone on the ICPS photofinder website. Below is Chuck Powell's take on the matter in the ICPS forum.
What is curious to me about Chuck Powell's account is the fact that there may be multiple clones of this particular grex, meaning that although a single female clone may have achieved cultivar status, the siblings of that cultivar may still be circulating in the carnivorous plant community. It would be very difficult to verify which particular clone is THE 'Peter D'Amato' cultivar registered to the ICPS,
I patiently waited for a cutting of this plant to become available... anywhere. I scoured Ebay, checked latest inventory updates, stalked FaceBook groups... I mean, as a crazy Nepenthes person these are just every day idle activities, but nevertheless I was always on the lookout. A rooted cutting finally became available from one of my favorite nurseries, Sarracenia Northwest! Finally! The plant arrived in perfect condition and I thought I was on my way!

Fast forward two months later and... disaster! First, for reasons unknown, mealybugs started appearing on my huge Hoya publicalyx 'Red Buttons', which unfortunately is right next to my 'Peter D'Amato'. At first there were only a few here and there and I dispatched them quickly with rubbing alcohol. After about a month of picking them off one by one, to my horror they spread to my newly acquired x briggsiana. I only saw a few, but I immediately treated my windowsill collection with Orthene, a systemic pesticide that has worked well for me in the past. The surface mealybugs disappeared, but shortly after the x briggsiana started to show strange soft black areas edges of all of its leaves. I didn't know what it was at first - it is surprisingly difficult to distinguish from many other common plant ailments in online searches - but it finally became clear that this was a severe case of root rot, perhaps initiated by mealybugs that infiltrated the roots. After cutting off nearly all the leaves, I decided to completely restart the plant by taking two cuttings, one with the growth point and another 3 node cutting from the stem. I discarded the root, pot and all, and made sure to sterilize EVERYTHING after I got rid of it. Horrible! Crossing fingers that the cuttings root quickly!
Update November 2020 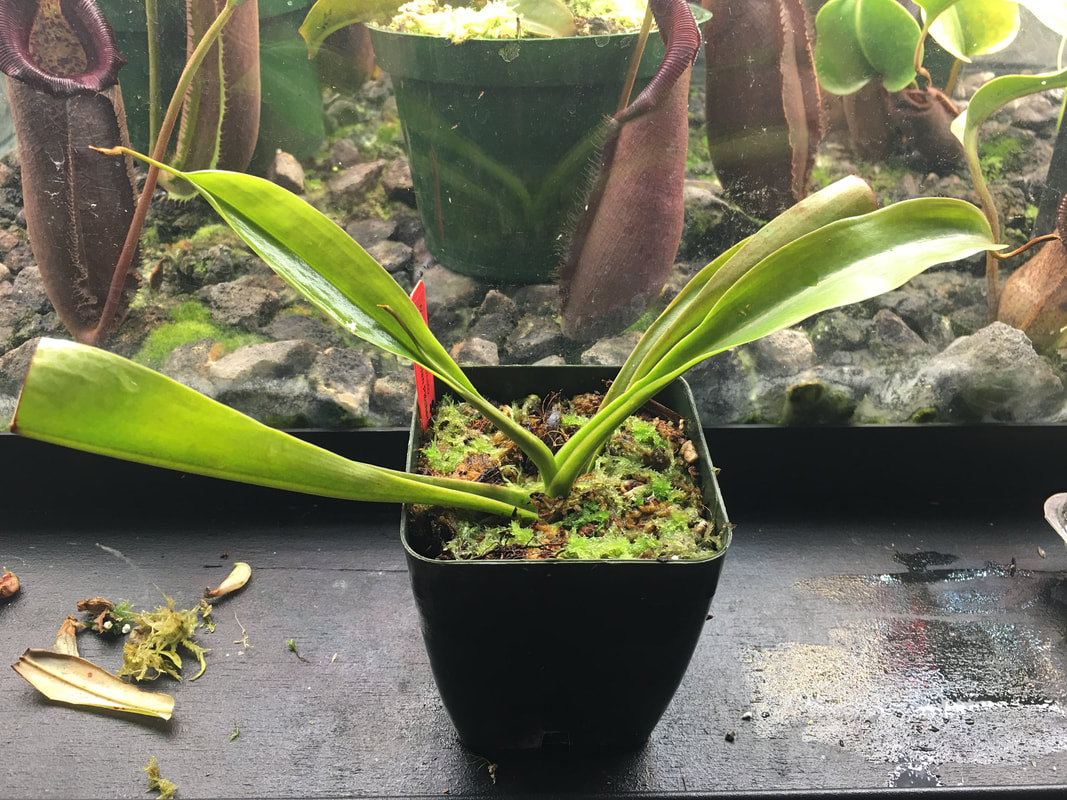 She lives!! The tip cutting has resumed active growth and was moved back to the windowsill. Looks very healthy!
Phew! Glad she pulled through! The second cutting still hasn't shown any new growth, but I believe it has at least rooted. The tip cutting looks great and I hope it starts to produce pitchers again soon!
Current Growing Conditions: South-Facing Living Room Window
Light:  ~260 - 460 PPFD or 16530 - 20110 Lux (depends on the weather outside)
- Can withstand high light conditions without sunburn
Humidity: ~80% night and 55% day
Temperature: ~68F night and 90F day (depends on weather outside)
Water: Let dry slightly between watering
Potting Mix: Cuttings are rooting in 50% long fibered sphagnum and 50% perlite
Fertilizer: MaxSea (1/4 tsp/gallon) every other week into pitchers
Additional Notes: Not sure if being prone to root rot is a x briggsiana issue or if I was just unlucky with mealybugs. It definitely should dry out between watering!